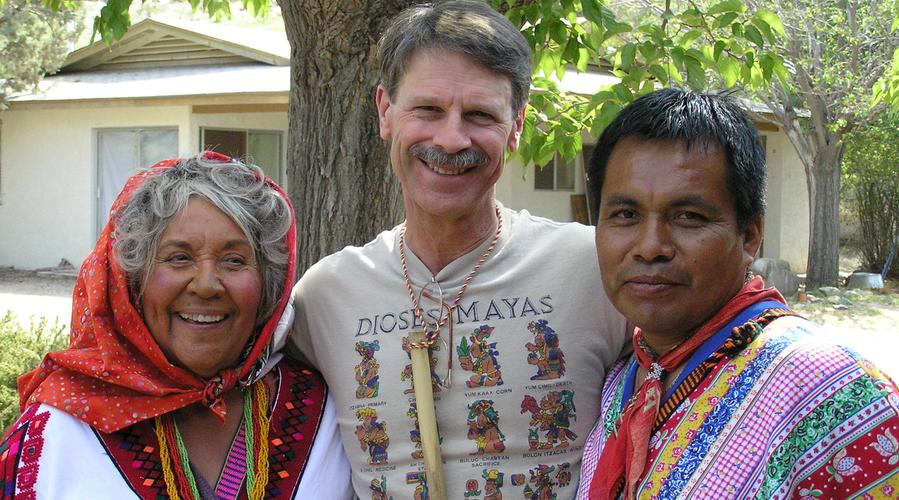 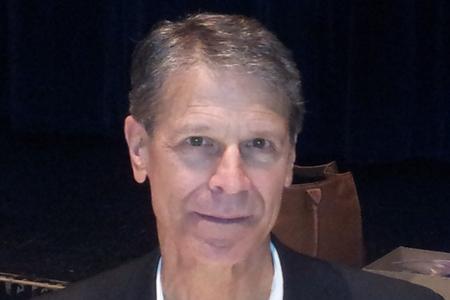 I am a psychiatrist, Jungian analyst, and researcher of other systems of healing and spirituality.  The picture above was taken a few years ago with my friends, teachers, and adopted family, Jaichima and Rutury.  From an early age I was aware that the Western academic mindset, despite its vaunted scientific productions, did not see or understand important truths about the world that were known to other cultures.  I remember as I sat with my back to an adobe at my grandparents’ friends', the Quintana’s, home in Santo Domingo Pueblo, New Mexico one shimmering hot summer day after a particularly striking experience, I thought “These things never happen back home in Illinois.”  I was somewhere between four and eight years old.

Life was kind enough to bring me in contact with a number of teachers who helped me find my way.  In college, Harry Thiebout, Professor of Philosophy, helped me understand why I had been fascinated for years already with the multiple, contradictory, nature of the Hindu gods and how Paul Tillich’s Systematic Theology was relevant to a premed major’s mental and moral development.  I had several excellent teachers in medical school but the best turned out to be Ma Karlie, a tribal translator who had never been to a day of formal school.  As my cultural guide at the hospital where I worked in Liberia she initiated me into such mysteries as how a fellow staff member had survived a suicide attempt after being jilted by his water sprite lover and why he was not at risk to repeat the attempt.  I began to see that in many cultures the healing system and the spiritual system were closely linked, if not one and the same.

During my internship here in San Francisco I met Christian mystic Rev. Michelina Russo who was so accurate in her psychic reading of people that she unraveled the carefully planned test questions of several of my friends, causing grunts and gasps of amazement in usually emotionally contained medical professionals.  Over the course of a few years Mickey taught me to do some of what she could do, further convincing me of the reality of her ability.

Now I began actively seeking a spiritual guide who could provide me with a deeper understanding of a system of healing I could learn to supplement and enlarge on what I was learning in my psychiatry residency program.  I took a year’s leave of absence from my residency training and traveled to temples in India and Thailand and stupas in Nepal.  I studied and practiced what I learned from Sri Aurobindo’s Integral Yoga and Sri M.P. Pandit’s guidance to it, Dr. Rina Sircar’s and Thaunpulu Sayadaw’s  Buddhist Vipassana, Tashi Gyaltsen’s Gelukpa Buddhism, Tharthang Tulku’s Nyingma Buddhism, Swami Muktananda’s and Swami Chidvilasananda’s Siddha Yoga, Rabbi Zalman Shachter’s Jewish Renewal, and Swami Hariharananda’s Kriya Yoga.  All taught me important things; some became friends; one or two brought disappointment. However none was my lifetime teacher.

Jaichima and her younger brother Rutury, both traditional medicine people or marak'ames of the the Wirarika people of the Sierra Madre in Mexico, appeared after I had looked for twenty years. She was capable of feats which were considered impossible by Western science, feats which she performed not for personal gain but to help others.  Just two illustrations, though both were repeated numerous times in my life, will illustrate.  She would hold hour-long private sessions with those needing her help, sessions which I describe as being like a session with your psychoanalyst combined with a session with your psychic.  The patient would begin to describe the problem and what he or she knew of the roots of it and Jaichima would break in to tell the history and the psychodynamic results the patient was about to describe.  Even better, she would then begin the patient on a course of understandable intervention which worked, given that the patient actually implemented the suggestions.

She also worked in dreams, not analyzing dreams after the fact but appearing in and interacting with the dreamer while the dreams were occurring.  Furthermore she could find people who needed this help whom she had never met in the physical world.  She helped about ten of my patients in this way over the years.  My patients (who did not even know of Jaichima’s existence) would tell me what was to them a strange dream about a Mexican Indian woman who came to them and dramatically shifted things for the better.  We would work on it for a while and I would bring them a photo of Jaichima.  Each patient would exclaim “That’s her; that’s who was in the dream!” One person credited her with saving her life by her timely intervention.  Rutury too holds striking abilities, among them an intensely kind and gentle manner which allows him to work well with animals as well as humans.

I have now worked with the two for 25 years as they have shared ceremonies and teachings which make me a much better healer.  I have attended many week-long pilgrimages with Jaichima and Rutury,  have presented workshops together with them at Esalen, and have traveled to sacred indigenous sites in Mexico so many times I have lost count, as well as to sites in Guatemala and Peru.

My deeper experiences are not limited to American Indian medicine and Hinduism.  I have also taken vows and lived as a Buddhist monk, attended Christian retreats and am a certified Christian minister, taken part in Sufi zikr, and led Seders in my home.  Working with Jaichima and Rutury has changed my life and solidified my belief in the power of other systems.  As I write this (04/15) I am just recently back from another five weeks in India visiting temples and ashrams and my family celebrated both Passover and Easter last week.

As I wrote for the American Psychiatric Association as they were examining how to shift diagnosis in the new DSM5, to reach many raised in the Western way of seeing life, it is essential to for us to take a “from the bottom up” rather than a “from the top down” perspective on spirituality. For many the words spirituality and religion conjur up “from the top down” visions of an old man with a long grey beard judging from above and witch burnings and the like.  Seen from the bottom up spirituality is really about human potential, what people are capable of as they grow and intuit and function at their best.

There are human experiences which have been documented across cultures and throughout history which far exceed normal functioning. Rather than to dismiss these experiences as myths, we need to study and seek to foster them.  One result of such investigation was the realization, coming from the study of one Hindu yogi, that contrary to then-established Western science, we can voluntarily control heart rate, blood pressure, skin temperature, and so forth.  The now widespread interest in biofeedback and meditation was jumpstarted by Elmer and Alyce Green’s groundbreaking research with Swami Rama at the Menninger Foundation.

I am particularly interested in working with people who are open to seeing spirituality as intimately connected with healing, their own personal healing.  Your spiritual system need not be mine (as you see I have firsthand knowledge of several systems) but it will help if you see the connection I see between the two important realms.  If you would like to read more about this way of thinking about psychiatry and psychology you might look into our Textbook of Transpersonal Psychiatry and Psychology, Scotton, Chinen, and Battista, Basic Books.

In addition to my interest in other systems of healing I have also learned the traditional curriculum of the Western Psychiatrist and Analyst.

Following is a brief summary of my professional life in that realm.

PUBLICATIONS AND PRESENTED PAPERS
46 papers and publications including in the American Journal of Psychiatry, Journal of Psychotherapy Practice and  Research, Bulletin of the Menninger Clinic, and Annals of Psychiatry and in venues including the Annual Meetings of the American Psychiatric Association and Northern California Psychiatric Association, and in the psychiatric residency training programs of the University of California San Francisco and California Pacific Medical Center.